The Canon EOS 6D is DSLR with a 20-megapixel full frame sensor, and a direct competitor to the Nikon D600. The EOS 6D also features the latest DIGIC 5 image processor and is priced at $1,900 for the body or $2,400 with a 24-105 f/4 lens kit at the time of the review. The 6D offers similar functionality and features that users can find from the next-in-line Canon model, without forking over the extra $1,400.

DigitalCameraReview noted the 6D is well-built but not as sturdy or weatherproof as its higher-priced siblings. The camera is 5.7 x 4.4 x 2.8 inches and weighs 26.7 ounces. DCR noted the camera features a nice-sized contour grip. Wi-Fi and GPS are available via optional accessories and the 6D accepts SD/SDHC/SDXC memory cards. Â DCR also found that the 6Dâ€™s controls layout is â€œlogical and convenient.â€ DCR had no complaints about the command and control dials, dedicated buttons and large status LCD, however, DCR was slightly disappointed in the locking mode dial.

The menus are arranged well and easy to navigate, according to DCR, which also noted users will likely not have to venture into the menus very often, instead using the dedicated controls. The camera includes a handful of scene modes, a Creative Auto mode and various other â€œambiance basedâ€ modes. Â The 6D has a 3-inch LCD with 1.04 million dot resolution and 100 percent coverage. The LCD also has seven levels of brightness, which makes it easy to use no matter the lighting conditions. Â The 6D also has an optical viewfinder, which DCR said is â€œlarge, bright and clear.â€ The viewfinder offers 97 percent coverage. 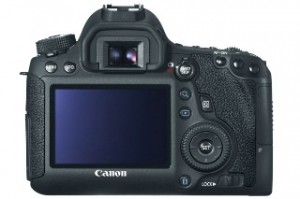 DCR found the 6D to be a speedy camera with quick start-up and shot-to-shot times as well as speedy autofocus. Continuous shooting speeds are at 4.5 frames per second, which DCR called â€œgood, but not great.â€ Battery life is estimated at 1090 shots when using the optical viewfinder, but GPS and Wi-Fi can diminish battery life. DCR called the video quality good for casual use and said for general use its â€œmore than acceptable.â€ Video can be shot in Full HD 1920 x 1080 at 30, 25 or 24 frames per second and it features an on-board microphone.

Image quality is excellent, according to DCR, which noted colors are richly saturated and exposures are spot on. DCR said the camera â€œmaintains good detail although images can be a little soft straight out of the camera. ISO ranges from 100-25600 and works well up to 800 and up to 12,800 when images are shot in RAW or RAW+JPEG. DCR also noted in-camera noise reduction worked â€œsurprisingly well.â€

Overall, DCR was impressed with the Canon EOS 6D and noted it offers a lot of bang for the buck, although users will have to make some concessions to get the DSLR at a lower price point. DCR was impressed with the image quality, ISO capabilities, overall performance and feature set for the price, but was disappointed with the lack of a built-in flash, single card slot and slightly soft images. DCR said the Canon EOS 6D is â€œan excellent camera for Canon DSLR users who want to step up to a full-frame camera without spending $3500 for the 5D Mark III.â€